Looking for more places to let loose and unleash your inner wildflower? Rise with the sun and join DJ Drez, Jeremy Sole, and Marques Wyatt for an early-morning freeform dance jam at Wanderlust Squaw Valley! For tickets and more information, click here.

Glitter poured from the bar as a Parisian DJ spun Euro vibes. The mob was decked out in funkadelic outfits, and it could have been a scene straight out of Ibiza, except that the only substances being served were Chameleon Cold Brew and kombucha. I, like many of my fellow party-goers, had only been up for two hours—and it was 7am. The early morning adrenaline zapped through my bloodstream and I melted into the music, sober, wide awake, and with my senses on fire. This might be my new morning routine.

What was this magical place?! Welcome to Daybreaker, one of the events in the world of dance fitness, or the new age of working out. Cocktails have been replaced by cold brew coffee and fresh pressed juices. We’ve ditched the stilettos for sneakers. Instead of partying ’til the break of dawn, we’re partying at the break of dawn.

From choreography spin classes like SoulCycle to Daybreaker’s sober dance parties, barre’s modern take on ballet and the hip hop zumba revolution—people want to sweat it out to the beat, and it’s not hard to see why.

Humans have been dancing since the beginning of time. It’s instinctual. And studies show rhythmic movement to have powerful healing effects. No longer do we have to punish our bodies to see results. Instead, dance fitness is turning the workout world on its head by dimming the lights, turning up the music and bringing on the party. For the first time people are realizing they can have a serious, kick-you-in-the ass workout, while also having fun. Here’s why:

It does something to the brain.

Healthy doesn’t necessarily look like a thigh gap and pack of chiseled abs. “Healthy” is less about looks and more about how you feel. So why does cycling, moving and dancing to a beat make us feel so good? Dr. Judith Hanna, PHD wrote in the Journal of Healing and Complementary Medicine, “The literature on dance and healing suggests that through dance, with its physical, emotional, cognitive and cultural dimensions, a person may gain a sense of control related to stress and pain.”

Science shows meditation can literally rewire people’s brains. Similarly, dance has shown to have powerful effects. By nature, dance is a multi-sensory experience. You’ve got music, movement and creative expression, all of which profoundly influence the mind.

“The intricate combination of movement, rhythm and music involves simultaneous right and left brain usage in the complex process of self-expression,” explains Hanna. So not only are you keeping your core tight, but also your brain sharp.

The Power of the Pack

“There’s something about vibing with a pack of people that yields a powerful sense of community. Hanna explains, “ …in group dancing there are positive interpersonal dynamics that provide what may essentially be a support group.”

SoulCycle preaches about “pack mentality.” The energy is palpable when a like-minded tribe comes together, rinsing away fear and insecurities, helping push each other past walls and into unchartered territory. It’s primal.

Inhibitions drip away right along with the sweat; the endorphins wringing themselves out. You drink in the music and feel it in your bones. Melody Afkami, founder of Austin-based Melody DanceFit, says, “[Dance fitness] is less about competition and more about a collaborative community. In general, people are yearning for more meaning in every facet of their life and fitness is no exception to this.”

There’s something deeply personal about dance.

In the ever-connected, anxious, “always on” world we live in, working out is the one place we can drop the selfie sticks and self-consciousness and just dance it out.

Even though you’ve got your crew to lift you up and hold you accountable, there’s also something deeply personal about dancing. After all, the old adage “dance like no one’s looking” came from somewhere. I’m not sure at what age we moved from rocking out at recess to death gripping the gym wall at the middle school dance, but somewhere along the way dancing stopped feeling natural and started feeling awkward. The stakes of nearly certain embarrassment too high to risk.

But there’s something about dancing in the name of fitness that renders some sort of permission to get weird and wild. After all, it’s all in the name of health, right? And when it comes to torching calories, you don’t need a tequila shot to give you permission to twerk your little heart. You can be stone cold sober and it’s perfectly accessible to WOO, wave your towel above your head, and get low, low, low.

That moment we lay down our inhibitions and let the music take over, surrendering to the fear that we’ll look stupid or get the steps wrong—that’s when the magic happens. It’s transcendental.

“It’s an activity that helps you lose and find yourself all at once.”

“For as long as humans have existed, dancing has played a sacred role in spirituality, religion, celebration, and community. Despite it being scary to so many, it’s actually one of the most natural things we can do. Dancing creates an indescribable connection, not only to yourself and others, but even to a different state of consciousness,” says Melody.

Bring on the disco balls, because dance fitness is about to level up.

The evolution of dance fitness will surely shift and take on a new life, as all things do, but one thing is for sure, the spirit of it is here to stay. My hope is that as more people come to experience the power of dance they don’t think of it as just a fad workout or trend, but as a lifestyle—a way of existing in the world.

So here’s to more dance parties, more fun and turning all our inner wallflowers into bright, brave, and beautiful wildfires. 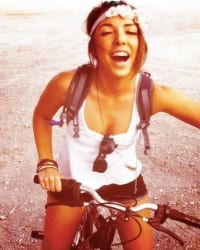 Laci Mosier is a copywriter living and loving in Austin, Texas. She and her one-eyed pirate dog live for exploring and discovering life’s magic. She is most inspired by yoga, running, Kundalini meditation, good books, great jams and even better coffee. Getting lost is where she is most often found. Follow her on the Twittersphere or Instagram.