Rahaf Khatib has been on the cover of a national magazine, interviewed by major news outlets, and boasts nearly 20K Instagram followers. She’s completed 11 marathons, including all six major international races, in New York, Boston, Berlin, Tokyo, Chicago, and London. But it’s not just her achievements that make Rahaf an inspiration for thousands of young women around the country—it’s also that she’s a proud, practicing Muslim who chooses to cover up.

“Sometimes I go to races, and I’m the only one in a hijab,” she says, which can can be scary. When I told her that I didn’t recall seeing a hijabi at any Wanderlust event I’d been to in the past three years, Rahaf simply responded that “is sad for me to hear.”

That’s what she’s determined to change.

Rahaf starting running in earnest in 2012. She’s a stay-at-home mom, and was hungry for  relationships like the ones she’d find with fellow runners. “Runners are just happy people,” she says. Rahaf is also an ardent yogi who practices about three times a week, mostly as part of her training. “The running and yoga community are inclusive,” she says, “and everyone is welcome no matter who you are. Because in the end, we’re all crossing the same finish lines.”

It didn’t take long for Rahaf to begin making waves in the running world. Her Instagram profile gained followers quickly—after all, particularly in today’s charged world—it’s not common to see a covered woman putting herself in the public eye so boldly, doing something that is traditionally secular. Rahaf cites the Nelson Mandela quote, that just as no one is born hating anyone else, that they must learn to hate, they “can be taught to love, for love comes more naturally to the human heart than its opposite.” With her profile, Rahaf aims to teach people this kind of love.

“I try to educate people about Islam,” she says. “Just because I cover doesn’t mean that I can’t run or partake in fitness. Even in these tumultuous times, there’s hope for a better more inclusive community,” she says. Instagram is her platform to use running for social change.

The running and yoga community are inclusive, and everyone is welcome no matter who you are. Because in the end, we’re all crossing the same finish lines.

Saying that she uses the platform for social causes is more than idle affirmation. In 2017, when preparing for the Boston Marathon, Rahaf raised money for refugees from her home country of Syria, totalling more than $16,000. This, of course, was happening concurrently with President Trump’s so-called Muslim Ban, which barred people from seven Muslim-majority countries.

“The political environment was tense,” Rahaf recalls. “People saw the injustice and donated generously. The spirit of the Marathon is about caring and giving back. That was what I was trying to do.” This year, for the London Marathon, she raised more than $6,000 for brain tumor research, in honor of her Baba (father) who has been diagnosed with the condition.

In 2015, Rahaf was a finalist in the Runner’s World magazine search for a cover model, and was selected alongside a male compatriot, Bobby Gill. Bobby regularly runs races in his underwear to raise money for children’s cancer research—but as a devout Muslim Rahaf didn’t feel comfortable posing next to him. Though it was tough to turn down an opportunity for hijabis in the fitness world to be front and center, she knew she had to hold true to her own principles.

“I was devastated,” Rahaf recalls, but less than a year later, “I got a call from Women’s Running magazine, who wanted to do a cover shoot with me,” Rahaf says. When it was published, Rahaf became the first woman in a headscarf to ever be featured on any health or fitness magazine in the world. It was one of the many moments that she felt she was truly doing what she was set on this Earth to do. 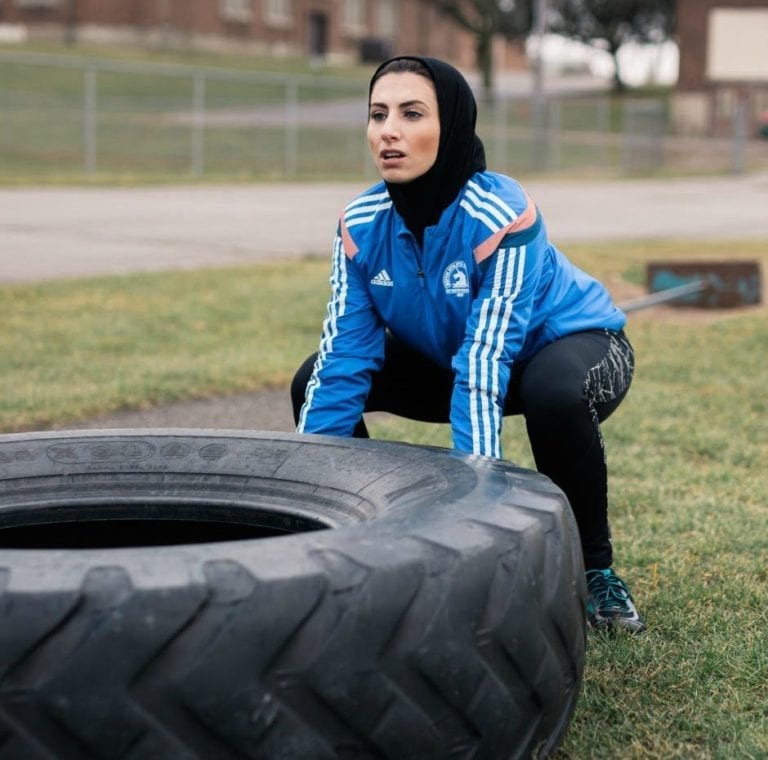 “When we don’t see ourselves in our community,” she says, “we can feel like we don’t belong in the world.” This can not only make a person feel unwelcome, but also keep them from participating at all.

“I hope what I’m doing will pave the path for covered Muslim women,” says Rahaf. She says that some women say that they avoid the gym and fitness classes altogether due to fear, but that mentality is slowly changing. “I had a friend tell me she quit running when she covered,” says Rahaf. “But she’s now slowly getting back at it after she saw my magazine cover.”

In September of last year, Rahaf posted an inspiring story on her Instagram profile of a young women named Katie who felt she had to choose between her love of running and her desire to cover. Katie’s family had worried that wearing a hijab would limit her opportunities—something Katie struggled with until she learned about Rahaf. These are the kinds of stories that Rahaf say inspire her to keep going.

She calls on this inspiration when she faces (even unintentional) bigotry. Once, in a hot yoga class, she casually remarked to her teacher that it was abnormally hot in the room that day. He responded that it was because she was covered. “I don’t think he intended to hurt me,” she says, though it was hard for her to bite her tongue—she’d been practicing yoga for five years! “I do get looks, but I’m so used to it I chalk it up as curious,” she says. “It kinda makes me feel strong. Like, ‘Hey, what’s up, yeah I’m covered and running marathons or practicing yoga in a heated 90-degree room, so what?’ I ignore everyone’s looks and do my thing,” she says.

It’s not only good for fellow Muslims to see Rahaf in the race lineup; it’s also good for non-Muslims to see hijabis as regular people, particularly in our strained sociopolitical climate. Rahaf recalls a recent moment after an informal Pancake 5K in Michigan when a man approached her at the finish line. “He wasn’t the race director or anything,” Rahaf says, “but he came up to me to thank me for being there. Breaking stereotypes and prejudices starts by regular people at the local level,” she says.

Though women in hijabs (hijabis) are beginning to dot the fitness landscape—in 2016, Ibtihaj Muhammad became the first Olympic athlete to compete for the US wearing a hijab, for example—it’s not common or exalted, even within the Muslim community. In fact, says Rahaf, health and wellness are Islamic principles. Three of the Five Pillars of Islam have to do with physical health.

“The pilgrimage to Mecca—this is very physical!” says Rahaf. Fasting is another physical pillar, as is prayer. Rahaf believes that taking care of oneself, and engaging in sport like running or yoga, is to take good care of oneself; to honor the body for God. What does she say to naysayers who criticize her partaking in these largely secular activities? “I’d say they haven’t read their Qur’an,” she laughs.

Yeah I’m covered and running marathons or practicing yoga in a heated 90-degree room, so what? I ignore everyone’s looks and do my thing.

Rahaf is considering getting her fitness certification, and maybe her yoga certification as well. But what of the religious iconography in yoga studios? Wouldn’t that offend a practicing Muslim? “It doesn’t bother me,” says Rahaf. “If something doesn’t mean anything to you, why would it matter?”

While Rahaf is proud of her role inspiring other Muslim runners and of being a role model for her children, she does sometimes grow weary of the burden that comes with being in the spotlight. “I know they are proud of me when I’m on the news or in a magazine… [But] I get tired all the time!” she admits. “Sometimes of course I wish I didn’t have to be the face of this, that I looked like everyone else, that I could run in shorts and feel the wind on my skin. But this is my faith. I am doing this for my family—and I am also doing this for God.”

And what of other young women she’s inspiring? What’s her advice? “I advise them to hold their head up high,” she says. “Have confidence in yourself and know your worth. Don’t let anyone put you down for what you stand for. To her I say this; you are flag bearer of this peaceful religion no matter what news outlets say. Keep doing good, and emitting that positive energy through a smile. People will see that you are holding on to your hijab, both figuratively and physically, and will appreciate this.”

Lisette Cheresson is a writer, storyteller, yoga teacher, and adventuress who is an avid vagabond, homechef, dirt-collector, and dreamer. When she’s not attempting to create pretty sentences or reading pretty sentences other people have created, it’s a safe bet that she’s either hopping a plane, dancing, cooking, or hiking. She received her Level II Reiki Attunement and attended a 4-day intensive discourse with the Dalai Lama in India, and received her RYT200 in Brooklyn. She is currently the Director of Content at Wanderlust Festival.