The Haiku Guys and Gals will be attending Wanderlust Festivals this summer. Connect with them for a personalized haiku at Wanderlust Vermont, West Virginia, and Squaw Valley.

We live in a tech-driven, screen-obsessed world where digital connections all too often seem to trump genuine face-to-face time.

Focused on filters and sharing the shot that will get us the most likes, our so-called “connection” to others is, in large part, solely online. But if we’d just turn off—or at the very least, put down—the phones and tune in to real time we might realize that the connection and the affirmations we crave are right in front of us… Begging to be noticed. Oddly enough, being so attached to our phones and technology can actually be quite isolating.

And that’s where The Haiku Guys and Gals come in: Spreading the love, making connections, and weaving together powerful words—with typewriters and poets.

“We’re self-isolating in so many ways these days,” says head Haiku Gal, Lisa Markuson. “So, by doing this project and encouraging someone to take a moment of vulnerability of their own time… I give them the chance to feel something that they never would have felt.”

“The best thing about writing haikus for strangers is that it fills a real need in society right now.” – Lisa Markuson

Lisa, along with her team of poets who make up the The Haiku Guys and Gals, are spreading the good vibes—and good words—in the form of haikus from their vintage typewriters straight to you. The Haiku Guys and Gals are sprinkled throughout the States in cities such as L.A., Austin, and D.C. (just to name a few). They also have an international presence—Paris is home to a Haiku Guy.

As a recipient of a haiku you’ve only got one job: Come up with the topic for your poem. “When people give us a topic,” Lisa explains, “they’re already invested.”

But there’s a decent chance The Haiku Guys and Gals might know what you want a poem about. There is, they’ve noticed, one very common topic they get requests for: love. Lisa reflects on the topic, saying: “It’s become apparent to us over the past three years that love is the most important thing that people are thinking about, afraid to talk about, and not getting enough of.”

“We want to push people outside of their comfort zones a little bit, but not so much that they’re falling off a cliff.” – Lisa Markuson

But you’ll have to dig a little deeper—The Haiku Guys and Gals don’t actually accept the topic “love” by itself. “If someone says ‘love’—which happens very often—we’ll ask them for context,” Lisa explains. “Are you looking for love, are you in love, are you falling in love, is the person you love right here, or are you feeling universal love? What do you mean when you say love?” You’ll have to think a minute longer and be a bit more specific.

Love not on your mind? Don’t worry, The Haiku Guys and Gals understand that choosing one single topic can be a daunting process. Lisa says every now and then some folks will have a hard time choosing. So don’t be discouraged. “We’re pretty intuitive and perceptive,” she explains. “We want to push people outside of their comfort zones a little bit, but not so much that they’re falling off a cliff.” So, for those who are interested, but not quite ready—or able—to pick a topic, have no fear: The Haiku Guys and Gals will help guide you to find one, or will simply offer a freestyle haiku.

For The Haiku Guys and Gals the experience itself is just as important as the final outcome—and they find it equally as rewarding as their recipients do. “The best thing about writing haikus for strangers is that it fills a real need in society right now,” says Lisa. We’re all pseudo-connected through social media, interacting on an almost robotic level. As Lisa puts it: “The individual has a serious lack of genuine interaction. Like, face-to-face, screen-less interaction with a person who cares. We have very little intimate interaction with art and culture.” Fortunately The Haiku Guys and Gals are here to change that. 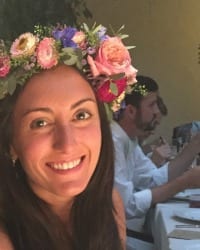 Maggie Peikon is a New York native, writer, and sufferer of insatiable wanderlust. An avid endorphin seeker she has a constant need to be moving, seeking adventure in all she does. She is a lover of travel, daydreaming, fitness, thunderstorms, and her dog, Finley. Despite the fact that she has to take medication daily due to a thyroidectomy, Maggie still believes that laughter will always be the best medicine. Follow her musings on Instagram and Twitter.