By Sean Hoess ~  In a recent interview, I was asked about my personal yoga practice, a question to be expected of someone who’s a co-founder of a certain well-known yoga festival. I think I managed a relatively cogent answer — and heck, it was for a business TV show anyway — but after a moment of reflection, I knew that I had to get some thoughts down on digital paper, both about me personally, and because I think of myself as a relatively regular guy, for men in general.

Yoga for Dudes class at Wanderlust, taught by a woman. Suspicious?

I’ll lead with the personal. The truth is this:  yoga is the hardest thing I’ve ever done.  It’s more physically taxing than the construction work I did with three burly German guys in Bavaria back when I was 18.  I feel like my natural aptitude for it is way, way below my aptitude for basketball, a sport that I’m uniquely bad at (5′ 8″, can’t jump, hands of wood). I can get so flummoxed in class that I can’t tell my left leg from my right, leaving me in the curious position of finding myself in a reverse pose from everyone else in the class — and wondering why they’re all on the wrong side.  And mentally, it’s taxing too — quieting your mind when your tendons are screaming at you (real pain, like the unhappy, crying face you see in that chart in the doctor’s office), while a teacher is guiding you through pose after rapid pose, and all you want to do is slip into a delirious savasana, or at least less painful child’s pose, doesn’t leave a lot of room for mindfulness. 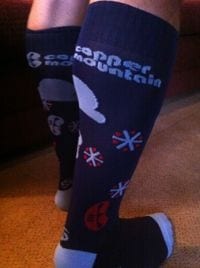 These are my stretch-resistant calves.

Having said that, I want to be clear that I’m not blaming yoga for my difficulties — yoga is thousands of years old, predating my conception back when cars had fins. The fact that thousands or tens of thousands of men have attained high-level practices across the centuries suggests that there is nothing wrong with yoga, whether for women or men.  But I also do not want to blame myself.  It’s certainly not my fault that I have calves the size of grapefruits, hunks of fixed, slow-twitch protein whose only purpose is to ensure the absolute immobility of my ankles (and keep me from jumping high in basketball). These physical traits are reality. But even if it’s true that I might not be as “naturally good” at yoga as the next person, I have to believe that I could still overcome.  But that raises the real question:  how badly do I want it?  How much effort and pain should I undergo to develop a practice?

It’s a funny question to ask, because I realize that one of the core principles of yoga, at least the modern, Westernized version, is that you can go at your own pace.  It’s not a race, and it’s not even necessarily a path per se, as one could do a series of the same poses for a lifetime and still find knowledge — and a perfection of alignment — until the end.  But none of it changes the fact that common yoga poses are painful to me, and as a general rule, I tend to avoid things that hurt.  I’m not alone in that (pain avoidance is something of a bedrock principle of human psychology, let alone  animal behavior).  So what I’m trying to do is to find a way to justify the pain, to explain my continued pursuit, something strong enough to give me the courage to push through to the other side.

Eoin is an inspiration. I can’t do this, either, though.

I’ve tossed around a few ideas that might inspire me forward.  The first is simple:  though I don’t like pain, I do love a challenge, and yoga is definitely that.  The second is a bit cerebral, but it’s still a good one:  I am getting older and I have noticed a loss of flexibility and a slow drip-drop of nagging injuries that don’t go away — the tweak in my lower right back, the pain in my left shoulder, the soreness in my left hip.  I’m an athlete, if not a gifted one, and would like to remain one, particularly now with my first son on the way (don’t want to be too old to hit a tennis ball with junior — and man, I’ll make sure to start him on yoga early so he doesn’t end up in my shoes!). The third is professional:  as much as I inhabit, live, breathe and endorse the greater values of Wanderlust — mindfulness, pursuit of balance, a love for nature and outdoor activities, environmentalism, political progressivism, embracing sustainable and local foods, and an appreciation of a rocking late night dance party — yoga is and will remain the heart of the festival.  I don’t want my heart to feel fear about something so core to what I do with my life.  I truly hope that a fourth reason will come later, and that will be just a good old fashioned love for how the practice makes me feel.  Already, I have seen some small gains in my flexibility, and I can honestly say that the hours after I practice are compelling — relaxed, a bit shaky maybe, but calm, loose, and fluid.  Not how I normally feel in my desk chair, or after a long run or game of tennis.

The reason I wanted to write all this in a public forum is because I have a sneaking suspicion that I’m not the only man who encounters these feelings.  Exhibit A:  the practice of yoga is overwhelmingly female, about 82.2% female to 17.8% male, according to the 2012 Yoga in America study.  At Kula Yoga, where I practice, I’m frequently the only man in a class of 15-20, and I’ve never seen more than 3 men including myself.  At Wanderlust, our statistics are equally estrogen-charged, with as much as 85% women at some events.  More entertainingly, we Wanderlusters have spent a considerable amount of time and energy trying to attract men, with results that border on the hilarious.  Since our resorts offer golf, we decided to offer golf in our scheduler in 2011, in the theory that husbands / boyfriends might attend with their wives / girlfriends, hopefully taking at least a few Yin classes in between tee times.  The result?  1 golf package sold to our non-yogi investors from Texas.  We’ve offered beer talks, bundled in downhill mountain biking, booked hot DJs who spin classic rock mashups, emphasized hikes and runs, and offered “Yoga for Dudes” everywhere we go, and nothing has moved the needle.  Even the most obvious thing — a 4:1 ratio of healthy, fit, educated, successful women — has failed to rouse males from their inexplicable flaccidity.

Here’s where I propose a theory and presume that I’m a spokesperson for my gender. I think men are scared of yoga.  Not all men, of course — Eoin Finn leaps to mind, a guy with even more muscle than me and about 100 times more flexibility — but a lot of them. Why would this be true?

– Yoga really is harder for men.  We are less flexible, and in the West, where many men participate in sports that build muscle and then proceed to spend the next 8 hours sitting in an office chair, we’ve exacerbated the problem.

– Men are used to being better than women at “sports” and don’t like it when they’re not.  Don’t hate me, men, for thinking there may be an element of chauvinism in your reluctance to “suck” at a pose in a class full of attractive women.  You’re used to running faster, jumping higher, lifting more weight, throwing harder, and generally feeling physically superior.  In that class, however, you’re toast.  You’re sweating and struggling and your very strength is somehow being turned against you, as one set of your inflexible muscles work to counterpose the best efforts of your other inflexible muscles.  I know more than a few men who have turned to private instruction to address this, but that’s not exactly cost effective for the masses.

– Yoga is not competitive, and men are taught to value competition.  I’m not sure this explains very much, because I think an honest examination would reveal some competition amongst yogis of both genders, whether for the perfect alignment, the perfect handstand, or the perfect butt.  But it might lose a few men.

Someday, I will triumph.

At any rate, those are my theories. If I am right in any way — and I will happily entertain any reasonably polite feedback here — then I would suggest that perhaps there is a huge opportunity out there.  Someone with far more knowledge than I should create an introductory yoga training for men.  Something that would appeal to the male psyche AND the male physique, something that might build up our damaged little egos and get us over the hump.  There’s no doubt that we men need yoga — I know I do.  I would just love a little more help. (And go ahead, call me a wuss).

PS.  I’ve also considered that maybe the ladies out there actually like the fact that their yoga studios, and yoga festivals, are largely testosterone-free zones.  Wanderlust is nothing if not a celebration of female empowerment and social bonds, and it might well be that our little mixture wouldn’t work nearly as well with a bunch of roving dudes added to the mix. Maybe a female sanctum is exactly what is needed in the world. Men already have theirs after all — that’s what poker, cigar bars and golf are for.